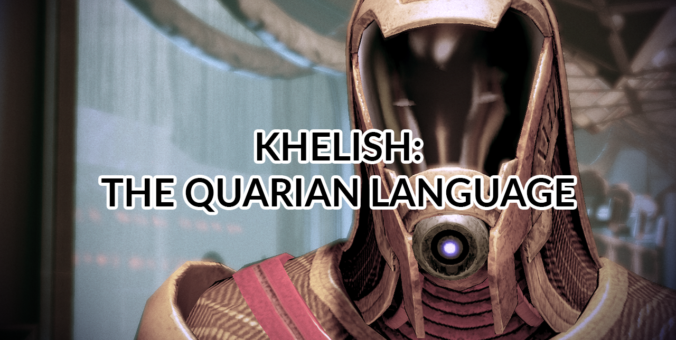 It’s possible quarians spoke different dialects before the Morning War but are now speaking one language named Khelish. We’re lucky enough that we know some words and sentences from Khelish, unlike other alien languages that are still a bit of a mystery to us. During an AMA on Reddit, Catherine M. Valente, the writer of Annihilation, explained that she used Hebrew as a model language for Khelish.

It’s hard to talk about Khelish without mentioning naming conventions. Let’s use Tali as an example since she’s our main quarian reference during the trilogy.

When we first meet her, she’s Tali’Zorah nar Rayya.
Nar means “child of”. The Rayya is Tali’s birth ship.
When Tali completes her pilgrimage and is accepted as a full member of the ship Neema, her name becomes Tali’Zorah vas Neema. Vas indicates she now belongs to the Neema and is a part of its crew. During Tali’s loyalty mission in ME2, she introduces herself as “Tali’Zorah vas Neema nar Rayya.”
Translated, it means her name is Tali, her clan name is Zorah, her birth ship is the Rayya and she’s now a part of the ship Neema.
A quarian insult would be to say someone is “vas Nedas nar Tasi.”
Crew of nowhere, child of no one. An outcast, an exile, as is called Golo from the book Ascension.

We already know some words, such as “bosh’tet.”
It’s an insult that means bastard, son of a bitch. It can be said to someone (”you’re a bosh’tet”) but it can also be used in a sentence such as “bosh’tet of a-” followed by a noun.

We know the meaning of some specific words. Rannoch means “walled garden” and geth means “Servant of the People.”
“Tiral azhana” means a handful of water and is a plant from Rannoch.

Keelah se’lai can be used as an exclamation to indicate despair or puzzlement. Example from Annihilation: “Keelah se’lai, what now?”

Annihilation gave us more material to work with. We now know that the quarians used to have a “clipped, melodious old Rannoch accent.”

We have new words and phrases.
“Mered’vai Rannoch” means “Forget Rannoch.”
“Pallu’Kaziel” (a ship name) means “Nevertheless, Justice comes.”
“Ke’sed” is a term used by a quarian ancestor VI, which are the blind newborn offspring of an animal called gorach, a sort of carnivorous sheep. The VI used the word to call a character affectionately.
“Von” is used to mean idiot. Example: “a complete and utter von.”
The literal meaning is “someone with a weak bladder.”
“Fa’yin” is another word, though there is no obvious translation, but it indicates some kind of plant with shells and nuts inside. The “keleven” is a breed of high-protein celery.