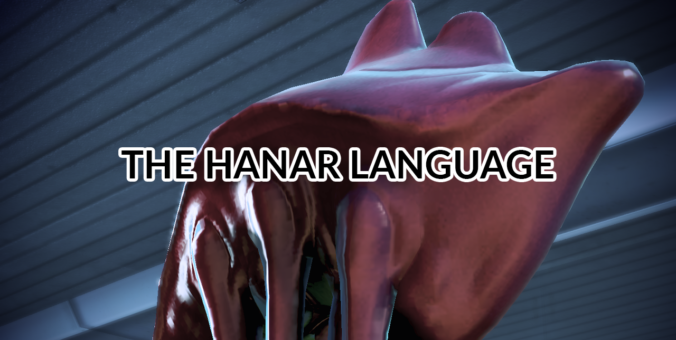 Before begin discussing the hanar language, we must first talk about Nyahir, or “The First Cresting Bloom,” celebrated among hanar.

This religious holiday honors the “gift of speech.” Many hanar believe they are able to talk thanks to the Protheans, the ones they call the “Enkindlers” and worship. Their homeworld, Kahje, contains many Protheans ruins, which might explain why the hanar worship them so intensely.

During Nyahir, there are stylized debates, poetry duels, and other traditional hanar art forms. The winners see their names “inscribed in bioluminescence for a year on the sides of Mount Vassla,” an underwater volcano which resides in the center of one old Prothean ruin.

The hanar, much like the elcor, have a unique way of communicating among themselves. Their language is made of elaborate patterns of bioluminescence that are difficult for others species to perceive. Most drell have their eyes genetically modified to be able to understand the hanar and their higher frequency flashes. It’s likely that we’re talking about ultraviolet lights.

“I had the treatment. I can’t tell the difference between a dark red and black, but I can see ultraviolet light as a silver color.”

In the book Annihilation, the elcor Yorrik even believes that the hanar’s entire culture relies on being able to see “the slightest flicker in the dark.”

To human eyes, they look like big jellyfish with constantly moving long tentacles. They’re often described as “hanging in the air” – they stay like this even while sleeping. They shine, thrum, pulse, twitch, ripple…  Their skin can flash in various colors: the hanar, Ysses, flashes blue when he’s angry. When he’s feeling better, his tentacles fall straight and relax to the floor. When a hanar is happy, they seem to be “pulsating with joy.”

How Can Bioluminescence Be Translated?

We don’t have an exact answer. Since hanar use bioluminescence, they don’t pronounce words. That means the translator has to interpret the light coming from them. It raises questions about translators: does it work with a camera? Or do hanar carry with them something that allows their language to be translated into the trade tongue, which is then converted into the language of the alien’s speaker? Who knows, I’m hoping some of you have an answer!

Hanar only refer to themselves in the first person with family or intimates, rarely, if never with other species. As the Emporium Shopkeeper tells Shepard during ME1 “it is just our way.”

As a result, they sound very formal and even highly polite. They aren’t, actually, always polite. They’re simply never going to insult someone the way other species do. Instead of telling someone “you’re an idiot who talks too much,” a hanar could say: “This One believes you are not thinking clearly and should perhaps refrain from talking.”