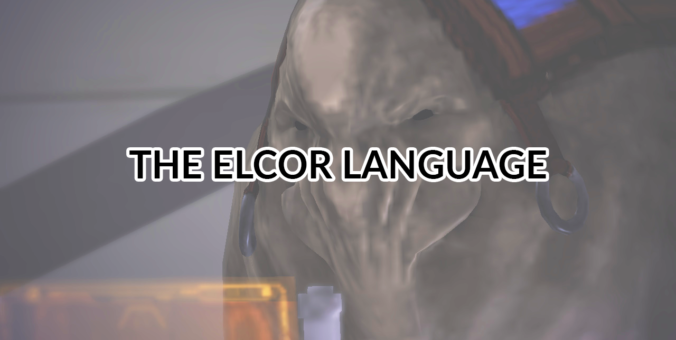 What Do Elcor Perceive?

Elcor’s sense of smell is extremely powerful. With a whiff of their surroundings, they can receive a flood of information about their location and the people around them. An elcor can even smell a corpse from miles away, as seen in the book Annihilation. Some situations can even be painful to them due to sensory overload.
The information they receive has to be interpreted. It still allows them to get a good understanding of their homeworld and other places they travel to, like the Citadel.

The elcor Yorrik from the MEA book Annihilationhad trouble with this, as he had to remind himself that “other species did not encode their every gesture with vast banks of personal information.” At some point his frustration got the best of him and he released it in the air with his pheronomal glands. The resulting smell was like “a vicious grease fire on a lake of cheap black coffee.”

Here’s an extract from Annihilation that sheds further light on the topic:

Yorrik let out a small trumpeting squawk of indignation. Three of his stomachs curdled. Had the hanar a nose, it would have gagged from the stench of hot soup and rotting fruit that flooded the room as the elcor’s humiliation reached his scent glands.

(Note: Yorrik is probably misguided in believing hanar have no sense of smell since the planet “Island Wind” is named for “the sweet-smelling land breezes that come off of the archipelagos of Kahje in the evening.”)

But What of Their Language?

The elcor use their powerful sense of smell, infra-vocalizations, and microgestures to communicate. As the book Annihilation put it: “Elcor could communicate a symphony with a sneeze.”

Calyn, the elcor ambassador in Mass Effect 1, told Shepard: “Our people communicate less through words and more through scent and slight movements.” So they do use words, just not as extensively as other species do. When Shepard stumbled upon Calyn talking to another elcor (Xeltan) on the Citadel, the two speak without prefacing their thoughts.

The irony is that, while their actual language is extremely nuanced and full of subtle meaning, they are unable to modulate their voice to convey the meaning they want. They sound emotionless, regardless of what they actually feel. In order to convey their meaning to other species, they preface every thought with emotional context.

They’ve gained a reputation as a slow and deliberate species as a result.

In the Citadel DLC, an elcor sent Shepard an email. They didn’t preface their thoughts at all.

“P.S. Don’t you find email liberating when talking to aliens? It’s so pleasant not having to preface everything.”

It’s not inconsistent with everything we know about them. In writing, they don’t have to worry about sounding emotionless. But it does seem to indicate the speech technique can be a bit of a bother to some elcor.

Among themselves, it’s likely that they cannot do it easily. With other species, well…
There is a theory that the technique used by the elcor is automatic, meaning they can’t control the way they preface their sentences when translated. The reason behind this theory is a dialogue between an elcor and an asari customer on Illium during ME2.
The elcor is most likely the asari’s colleague, as they are both going to a tech shop to pick up something for their boss. Here’s an extract from their conversation:

She clearly believes that he cannot be sarcastic or lie, therefore his translator has been hacked. I believe the issue is that she doesn’t realize the technique is just that, a technique. It’s possible not to use it. It’s also possible for an elcor to be extremely sarcastic and not always speaking literally. “With overwhelming joy” can mean the opposite, as can be read in Annihilation.

Furthermore, in Annihilation, Yorrik is quite insulted when a character tells him they thought elcor couldn’t lie. He replies that elcor can be actors. The implication is that they can control their speech technique and are able to lie. The translator is not directly translating their kinetic language.

Can Other Species Use the Elcor Speech Technique?

Yes. Some elcor (like Yorrik’s grandfather Verlaam) believes other species could benefit from using the elcor speech technique, especially in times of great stress. Verlaam received many visiting veterans of all species who came to learn the technique since trauma prevented them from expressing their emotions.