Every Friday, we showcase an artist involved in the Mass Effect community. This is Artist Spotlight.

This time Deb interviewed Inklie, an artist with a unique style. You might know Inklie for her drawings of the Krios’ family, Javik or her renegade Shepard, Grace.

Hi Inklie. Can you introduce yourself?
I’m a 20 year old that mostly just play video games and draw fan art of video games.
I also go outside on occassion. Art and animation has been a huge part of my whole life and has been the only thing I’ve really been interested in.
My dad is a huge gamer nerd and my mom drew a lot, so that definitely influenced me as well.

I love drawing stylized anatomy and cartoony stuff but I also do a ton of realistic pieces for practice in my sketchbook, whenever I have the time!
However I don’t feel like I really began to improve on my style until I started to post on tumblr, since I pressured myself to look at my work more critically.
And just recently my arm eventually gave up on me, so I was forced to take my time with my art and thus it actually stopped my fear of…well not posting art EVERY day (still working on it tho).

In a way my injury was a blessing in disguise because I now feel much more relaxed when drawing. And also more proud of what I do because I don’t rush and pressure myself as much as I did a few years ago.
DEFINITELY looking forward to Andromeda because of this, haha!

I chose three Mass Effect pieces you drew and asked you questions about them.

Here’s the first one: 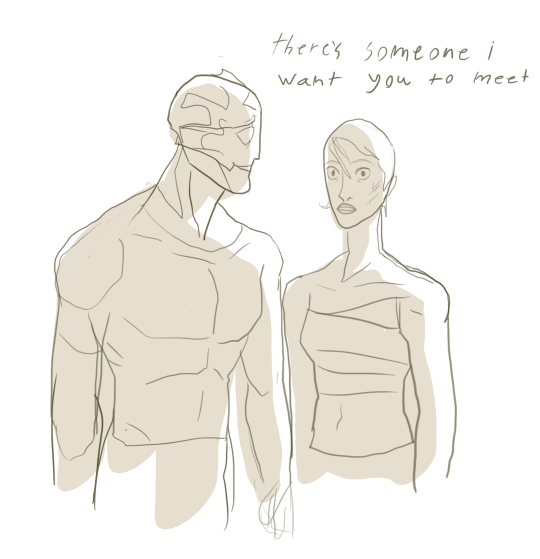 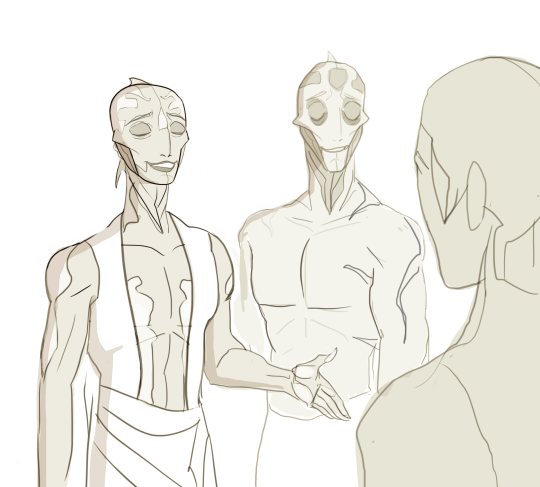 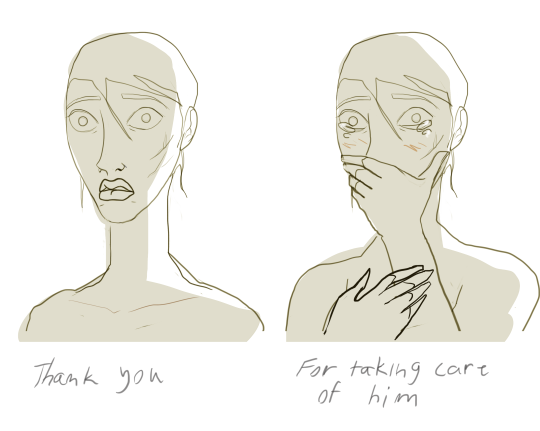 I find it incredibly moving. It left such a big impression on me, I knew this had to be THE piece I should first ask about.
Irikah is rarely drawn or even mentioned by fans, most of the time they tend to focus on Thane/Shepard. But you, made her a central character in this fanart. Thane is proud to introduce her to Shepard (your Shepard who is very much in love with Thane). And here they are, in this very beautiful moment, in total respect of each other. Hell, your Shepard is crying as Irikah tells her: “Thank you for taking care of him.”
Your own message resonated in me: “plz don’t forget about irikah she’s very important”

So let’s talk about this piece. Did you have to think hard about how to draw Irikah?

Agh my precious Irikah…
I didn’t really think too much on how she should look at the time, aside from the obvious decision to not give her weird lizard boobs. I did want her body shape to be very lean and muscular, since that’s how I always imagined the average drell female looked like.

I mostly wanted to draw the concept and the emotion of them finally meeting each other, so at the time, the art itself wasn’t as important to me. The whole “meet you across the sea” scenario has always been interesting to me (although frustrating because of how little they explain how the damn thing works). Irikah is just ignored by pretty much everyone in the fandom (I can’t really blame them tho, since Bioware didn’t exactly do a great job writing that part of Thane’s character), so I kinda felt like it was my duty to give her some content. In the future I will probably make a more detailed design of her and maybe even draw this scenario again!

In regards to your Shepard crying… She’s not often doing this, is she? She’s a Renegade who doesn’t seem like the type to show her emotions. Did you draw her crying to highlight her deep emotions at that moment?

She’s actually way more sensitive than you’d expect from a Renegade. Although she doesn’t cry at the drop of a hat I wanted to show how deeply Thane affects her emotional side. She’s been pretty much imagining this exact scenario through the entire time they’ve been together. She had already lost Kaidan, who she had started to fall for but because of her ruthless background and hardass attitude, she put the mission above her feelings on Virmire and choose Ashley instead.

Because of Torfan, Kaidan, and her father, she has a fear of loosing people she cares for. So when Thane explains to her that he’ll be waiting for her at the shore, it brings her great comfort and helps her go through his death more easily.  And even if I don’t imagine the three of them in a poly relationship, it does give some form of proper closure that Bioware didn’t provide for us.

You’re very much a fan of the Krios. This isn’t the only piece you’ve made about them, there are others (like here and here). What do you like so much about them and their family dynamic?

I’m a bit ashamed to admit that deep down I’m a very selfish person that wants Thane all for myself haha, but I feel that by completely ignoring Thane’s relationship with Kolyat and Irikah, you make a disservice to his whole character. I mean his whole character centers around his son and his wife, so it really makes no sense leaving them out.

I think I’m also interested in them because of the potential it had. Spacer Shep and Thane sharing their happy memories about their families. Kolyat and Shep having awkward conversations about whether or not he should call her mom and weird family reunions is just really funny to me. And don’t forget the awkward dad jokes and clashing cultures between Spacer Shep’s family and Thane’s.

Just give me all the cheesy family stuff ok.

The second piece is this concept art of Tali: 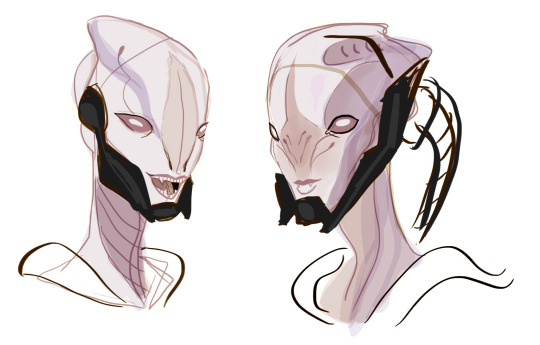 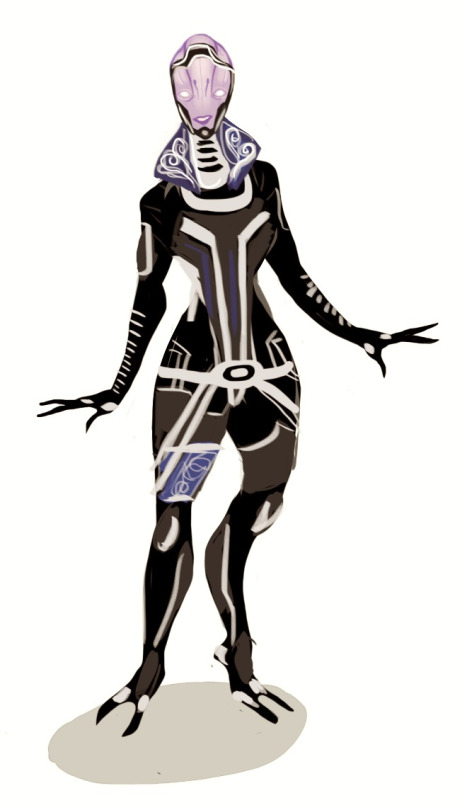 It goes back to this fandom’s eternal dislike of Tali’s photoshopped face. Can you describe your process while trying to draw these?
Were you inspired by the original concept art for the quarians found in “The Art of Mass Effect”?
Those definitely look more “alien” than what we got in the game.

When I designed my version of Tali, my main thought was “protheans found them hot.” So I tried to give her a slight prothean feel to her with the sharp teeth and lean head/facial shapes, as well as giving her those weird mouth and nose lines that Javik has. Also yes I was looking at the original concept art when drawing her! Especially the left and lower versions that have a slight bump (shark fin..?) on her head. 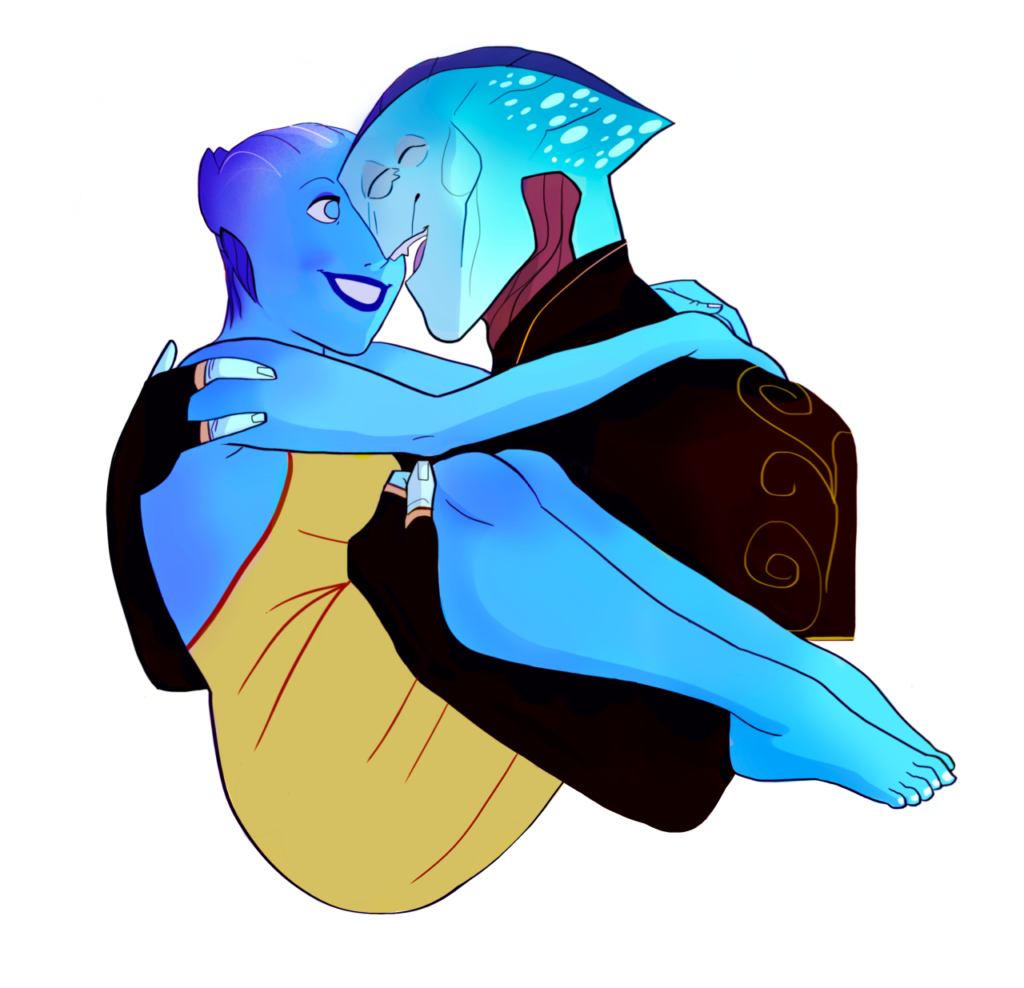 It’s Liara and Javik, that you often draw as a couple. I absolutely adore the genuine joy on Javik’s face. You’re one of those rare people who draw him like this, you don’t hesitate to show him as more than a tragic character. Is that important to you?

When I first joined the Mass Effect fandom, Javik was the character a lot of people either HATED or just didn’t care that much about.

It was mainly my friend Reyairia that really started the real T’sovik fandom (to my knowledge at least) and the reason why I wanted to get a tumblr and post my art. At the beginning I got passive aggressive (sometimes even hateful) comments and tags in my art about how much of an asshole he is and how he doesn’t deserve someone like Liara, which just made me want to show him in a more sympathetic light?

Obviously I don’t deny that he’s an asshole (part of the reason why I love him and the character development he goes through) but we more than often saw him being depicted as JUST that when he’s also an incredibly tragic character that’s a victim to a horrible war.

So I think giving the character that has probably suffered the most from this war a happy ending makes all the sacrifices and horrible moments in the game worth it and the ending feel much more satisying. I just really like good old fashioned happy endings, especially when the journey to it has been full of pain.
Just give the guy a little bit of happiness, he’s been through a lot.

And what do you enjoy about Liara and Javik? It’s a relationship that the player could not experience in the game, is drawing them a way to make it more “real” for yourself and other shippers?

What I love most about T’sovik is how much their character development relies on each other and the fact that you have to make them get along for it to happen. Liara’s prothean obsession through the series never really goes anywhere without him and something finally challanges her somewhat naive beliefs about the Protheans and how war can affect people. You can see how Javik’s entire attitude about primitives changes at the end of the game, but ONLY if you make them get along. To me, Liara’s character just feels much more solid and complete with him because of this (I wouldn’t even like her that much if Javik didn’t exist tbh).

They also hit all my weak spots when it comes to shipping both aesthetically (the big bulky one with the tiny one) and conceptually (the really grumpy one with the really cute one). I love how Liara is the only one that can completely stump Javik. There’s a part were he literally responds to her smackdown with just “beh…”

I wouldn’t say it’s “a relationship that the player could not experience in the game” since the game heavily implies that Javik cares about her. Him sitting on the bathroom floor, drunk and blabbering about how pretty her eyes are was a big hint. And Kasumi, the predictor of all future couples in Mass Effect, said they bicker like an old married couple.

I asked you to pick a piece that you’re proud of, or simply one that you want to showcase. You chose this one: 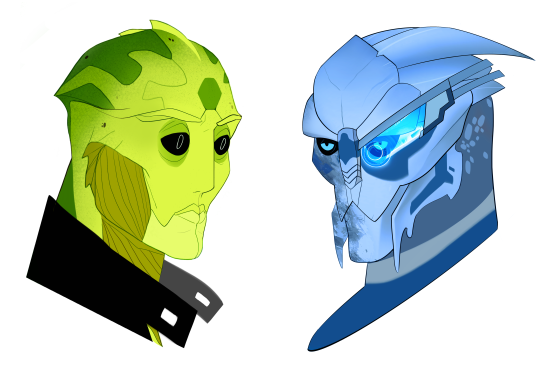 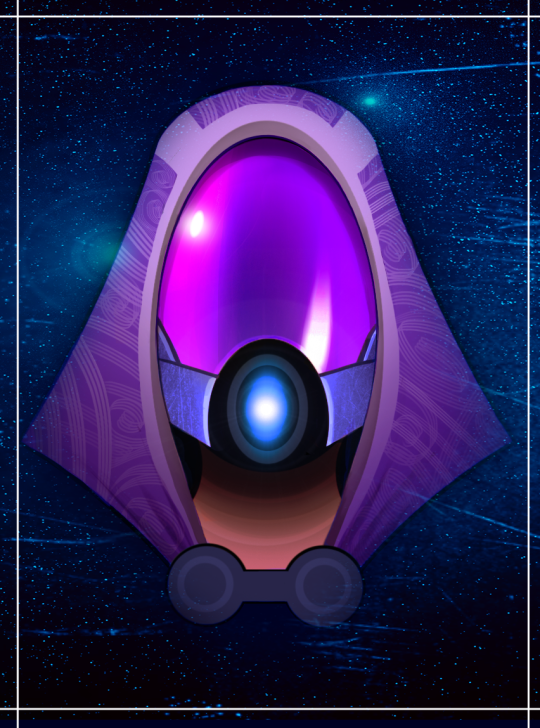 U GUUYS im so excited i had to draw my buddies

I made these during N7 day and I just felt particulary joyful drawing these, knowing that we’ll be experiencing this game series universe once more very soon. And hopefully with just as memorable characters like in the original trilogy 😊

Thank you! Last question: What advice would you give people new in the fandom who want their art to be seen by more people?

I’d say look at what’s currently popular in the fandom and draw that!
I’m not saying you should ONLY draw what people like of course but it’s a good way to gain more attention to your other/original work! At least that’s what worked for me.
However the most important thing is that you enjoy what you do and feel proud of it!