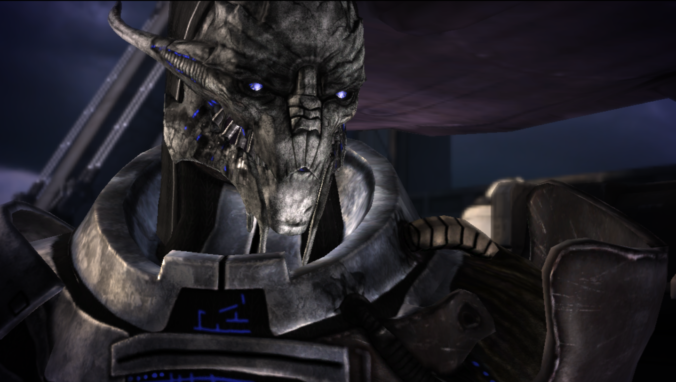 Our guest blogger: Ierian is but a simple 20-year-old, trying to survive capitalism and an aerospace engineering major. They’re autistic and have a special interest in Mass Effect, and sometimes get yelled at for talking about it too much. You can find them on Tumblr here.

This week Ierian is going to talk to us about Saren and his character development. There are spoilers for the Mass Effect books and comics in this guest post.

Introduction
Saren Arterius is, in short, an incredibly complex character. Even in just the first game, Saren appears to be a simple “for the evulz” villain figure, but as the game progresses, it’s revealed he’s being controlled by a robotic Eldritch horror, and in fact a victim of something much greater than anything imaginable. Extended universe content, namely the comic Mass Effect: Evolution and the novel Mass Effect: Revelation, find him at vastly different points in his personal timeline, and his character changes accordingly.

It’s very easy to brush off Saren as “just an asshole,” “just indoctrinated,” or even “crazy” and “a psychopath,” all of which are real things people have told me he is when discussing his character. But is he really? The answer, of course, is far more complex than a simple “yes” or “no.” The purpose of this article is to trace Saren’s character arc from when he is sequentially introduced in Evolution to his status in Mass Effect, and try to construct a more detailed portrait than what is fed to us in-game.

Mass Effect: Evolution and the Fall of Desolas Arterius
While not the first medium published, Evolution is the first point in the timeline in which Saren appears, so we’ll start here. Brief summary: in 2157, the man who would become the Illusive Man, henceforth referred to as Jack Harper, encounters General Desolas Arterius, Saren’s elder brother, and his squadron (including Saren himself and my personal favorite character, Lieutenant Abrudas) on Shanxi during the Relay 314 Incident. Reaper tech is found, and bad things happen. The setting hops around until settling in Temple Palaven, an important religious place for turians on take a wild guess which planet, and more bad things happen. At the end, Saren is forced to call down an orbital strike on the temple with Desolas inside.

Throughout Evolution, Saren is aloof and doesn’t socialize well, but is generally amicable. He jokes around and teases his elder brother, albeit in ways that are not immediately obvious as jokes, relying more on subtly sarcastic comments and Desolas’s understanding of how his little brother communicates than outright “this is a joke, when I stop talking, you laugh” humor. He is professional, but relaxes around Desolas. His position at Desolas’s right hand strongly implies he and Desolas are close, and his brother values and respects him. There is no trace of the hostile behaviors Saren displays later on in the series; for all points and purposes, he appears to simply be your standard introvert with poor social skills.
Before the orbital strike lands, Saren manages to get in one last message to Desolas. In this final communication, Saren promises to avenge his brother’s death, and get back at the humans responsible.

A Downward Spiral
Fast forward. It’s now 2165, and ME: Revelation is kicking off its main plot. Saren is found off doing his own thing, tracking a stolen weapons shipment, and eventually gets tangled in Anderson’s adventure. Temple Palaven has taken its toll: in his first POV chapter, Saren attacks a group of mercenaries and berates a turian member for stealing weapons from his own people and selling them to humans, of all aliens. They have a brief exchange, and it’s established that Saren is still very much angry about Relay 314.

Through Saren’s own POV sections and narrative from Anderson and Kahlee Sanders, a new picture is painted: Saren has grown more callous, unflinchingly reciting infractions of Council law to dying bodies. He still struggles to understand other people, as evidenced by his utter lack of ability to talk to Anderson and Kahlee in a way that conveys what he wants. His Spectre work is a good fit for him, allowing him to do as he pleases to get the job done, but still following his own rigid moral code- he steps in to defend an innocent prostitute (and a disgusting human, at that, the exact species he considers the absolute worst of them all) from getting hurt, and puts a batarian he tortures for information out of his misery once he’s through with him, stating, “After all, he wasn’t a monster.” He wakes a batarian woman for a single piece of information, then puts her back into her coma so she can rest peacefully, showing death isn’t his go-to solution.

Throughout all this, there is one thing made abundantly clear: Eight years after the fact, Relay 314 and the ultimate fate of his elder brother has taken its toll, and boy howdy, is he ever not taking it well. Saren uses Shanxi and his unnamed-in-this-novel brother’s death as justification for his hatred of humans, despite the comics showing he himself pulled the metaphorical trigger on Desolas. He is in a mental state wherein he’s absolved himself of guilt regarding Desolas’s death, and instead blames everyone else. Given it’s implied he idolized his brother in Evolution, it’s also probable he’s ignoring what Desolas did wrong and putting everything on the humans.

It’s a bit of a convoluted thought process, but then, grief and trauma aren’t really known for being logical. Saren follows a “I did this because this happened because of these people” kind of logic, and over eight years, “get revenge on Jack Harper” gradually became “so anyway, all humans suck, and while I’m not going to murderize them because I’m not that bad, it sure would be super awesome if they left me alone for-fucking-ever.” He may tolerate aliens and be willing to defend them, but they are not his friends, and humans are his enemies.

Indoctrination Theory
And so we come to Mass Effect 1. This is the Saren Arterius everyone’s familiar with: heavily indoctrinated, voiced by the incredible Fred Tatasciore, and inexplicably steel-gray despite being expressly described as (in Revelation) and colored (in Evolution and literally all art in the art book) a stark bone-white. Old engines, amirite?

By the time we run into him in ME1, Saren is entrenched in Sovereign’s grasp, with eyes that glow that eerie blue whenever Sovereign takes hold. The two most notable examples of “the eye thing” I can think of off the top of my head are on Virmire, when the sirens snap him out of his focus on Shepard (thus showing Sovereign doesn’t have a complete hold, and can be broken if Saren is sufficiently startled), and on Eden Prime, when his eyes start glowing right before killing Nihlus (almost like he wouldn’t want to kill the one person he, according to canon, actually likes and cares about, and Sovereign had to force him to eliminate a perceived threat).

This begs the question, how much of Saren’s behavior in ME1 is his actual personality, and how much is Reaper influence? For that, we can look at other examples of indoctrination victims: Dr. Kenson from the Arrival DLC is the most detailed example, as she outlines for you how the Reapers got to her. It’s not outright “okay, we’re going to do this now;” it’s little whispers, niggling ideas that gnaw at you until you think it sounds like a pretty swell way of thinking. The Reapers got Kenson by playing off her desire for knowledge. Saren was snared by Sovereign promising him (lying to him) that this would save people rather than slaughter them.

From Kenson, and from the very meaning of “sleeper agent,” we can infer that Reaper indoctrination doesn’t outright change any behaviors. Sleeper agents need to appear as though nothing is wrong, and they’re behaving just as normal. Thus, Saren’s less savory behaviors- his antisocial attitudes, his skewed moral code, et cetera- are not directly caused by Sovereign, and are in fact integral parts of his personality. They existed in Evolution and Revelation, before Sovereign, and thus they cannot be blamed on the Reapers.

Side note: It’s interesting that, while Saren is definitely an aggressive xenophobe, that’s not the trait Sovereign chose to manipulate for the basis of indoctrination. When Saren is explaining his motives on Virmire, he makes no mention of eliminating aliens and putting turians on top, the way Desolas did in Evolution. Desolas was a turian supremacist, and the Reaper tech in his story fed on that and warped him. But that’s not what Sovereign works on. Saren’s motivation for working with Sovereign is that indoctrination convinced him this would save the galaxy, not that it would wipe out the horrible no-good aliens who killed his brother once and for all. While it’s highly likely Sovereign made mention of that, what ultimately drove Saren to ally with the Reapers was his loyalty and sense of duty to the Council and the galaxy at large, and the corresponding drive to protect them.

In Conclusion
So, that’s an awful lot of rambling I did. I apologize, it probably didn’t make sense in some parts. But this is the part where I tie it all together, because my tendencies toward nonlinear thought processes do eventually reach a point.

In short: Saren Arterius experiences a twenty-six-year character decay, and it all starts with his brother. General Arterius dies, and his somber but amicable little brother is left to wallow in his grief and the trauma he endured, mulling over what happened until humans are horrible, Desolas was an angel, and Saren himself is a ruined shell of who he used to be, ripe for the plucking by evil robo-squids seeking to kill us all.

Does any of this excuse Saren’s behavior? No, of course not. The point is not to excuse, but to explain. Saren’s a xenophobic, mean son of a gun, and all the tragic backstory in the world can’t change that. He has his reasons, but they’re not good, and they’re certainly not healthy.

But for fuck’s sake, could we at least stop throwing around ableist slurs like “crazy” and “psycho”?