Every Friday, we showcase an artist involved in the Mass Effect community. This is Artist Spotlight.

This time Marina (aka Dustie) interviewed Stormcall, an artist with a penchant for turians and showing hard-edged characters with a softer side.

Ok! So first of all, I’d love for you to tell me a little bit about yourself and how you found your way to tumblr and the Mass Effect fandom.

I’ll start off with the basics, then! I’m Darcey. I’m 24 years old and I have been in to drawing since I was a little Pokémon nerd at the age of 7. When I’m not drawing I’m playing video games or drawing (or you know- doing the adult thing and working and paying bills).

I got into the Mass Effect fandom embarrassingly late, which was around two years ago. I had just moved into my first apartment by myself and I wasn’t sure in many aspects of my life exactly what I was doing. I passed by a local Game Stop and saw Mass Effect on the shelf and picked it up on a whim. I was instantly enthralled. I have always loved story-rich plot lines and Mass Effect was dripping with such beautiful lore. I couldn’t get enough! Two weeks later and running on little less than 5 hours of sleep each night and I made it through almost all three games. It helped me through such a tough time in my life. When I had a tough decision at work I’d tell myself “What would Commander Shepard do?” I know it sounds silly but it helped me more than words can express.

Immediately after finishing ME3 I felt a gaping hole in my heart and that very night I drew my first Mass Effect fan art. About a month after posting it on DeviantArt it popped up on a Mass Effect page with a link attached to tumblr. There were so many people that wrote such encouraging words that I fell in love with that I joined tumblr shortly after and have loved every moment since. It’s truly one of the best communities I’ve ever had the pleasure to be a part of.

So I’d love to talk to you about a few of your pieces.

The first is one of the earliest you have posted, I believe? 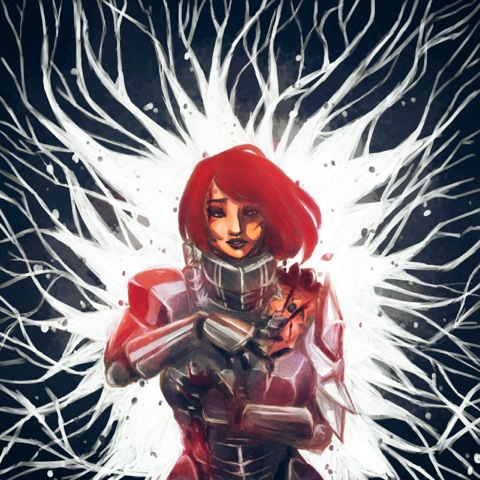 Ohh one of my favorites too! Shepard’s dreams in Mass Effect 3 show a big part of their internal struggle. It’s not only one of my favorite dynamics of the game, but it also shows that Shepard is more than just a Commander. That beneath the militaristic Shepard there is a human who’s crumbling beneath the weight of the galaxy. It gives them depth and I loved capturing that fragile side in this drawing.

The reason why I like this piece so much is that it does show Shepard as being vulnerable, yet I can still see their strength.

Exactly! I’m glad it conveys such strength even in the weakest of moments. I love being able to show a more softer side of Shepard that we don’t get to see too much of in game.

The next one I want to talk about is this one,  which showcases someone I know you care for greatly. 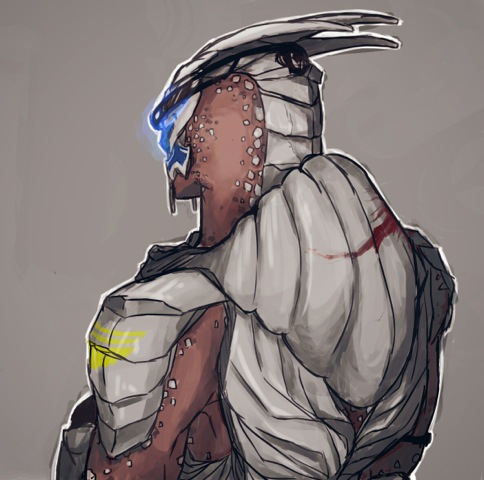 I really wanted to show him in a state of loss. In the same day he loses his team on Omega and barely makes it out alive. The only thing he has to show for it is a scar that will always remind him of his failure. Those scars run much deeper than flesh and blood.

And we all know of my love for Garrus! I can’t even begin to tell you how much fun turians are to draw!

That’s one of your signatures, I think, your ability to draw turians (and Garrus especially) looking fierce and alien and yet incredibly soft. Much like your piece of Shepard, strength and softness at the same time.

I’d love for you to tell me more about Garrus and what drew you to him as a character of interest in the first place!

I’ve heard a lot of mixed reviews on the fact that Garrus joins Cerberus so willingly in ME2. I, for one, admire his loyalty. He’s always there to help Shepard with just the right amount of smartass comments to keep them on their feet. I love that about him. There’s an art of their balanced relationship that the voice actors portray so beautifully that just drags me into Shakarian hell.

As for the last piece, I don’t think this will come as a surprise, but I wanted to you to talk a bit about this one, if you would! 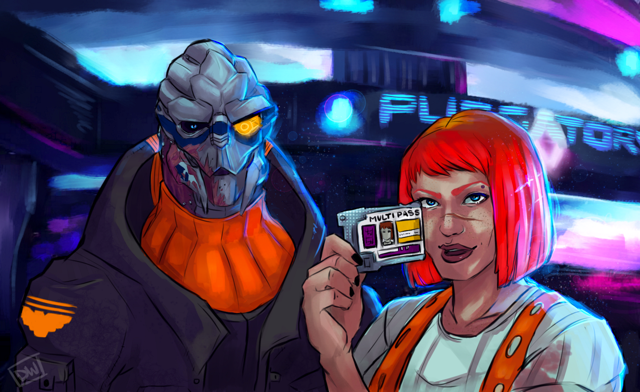 I mean, HOW does one go wrong with a Mass Effect/Fifth Element crossover? I am a HUGE Bruce Willis fan. I pretty much love all his movies.

I could just imagine a young Shepard stumbling upon their mother’s old movies (Spacer Shep!) and falling in love with Leeloo and wanting to be like her. Fast forward years later and showing Garrus his first human movie accompanied by their anxiety of the fact he may not like it. In the end, he enjoys it just as much as they do. I wanted to show a much more relaxed side of them, like in the Citadel DLC. Just imagine Shepard flashing their Multipass to everyone with such enthusiasm and a huge grin on their face.

The light effects were definitely a learning experience for this piece, but gave it a certain flare that I was very thrilled about.

The Fifth Element and Mass Effect do seem like the perfect mix. I like thinking of this as a Halloween costume (as you posted it) or even a fun AU in which Garrus (Corben) suffers through/loves Leeloo Shepard’s antics. It’s such a fun piece and it shows their personalities so well, along with yours!

An AU of Garrus as Corben and Shepard as Leeloo? Sign me up!!

You seem to be able to do serious pieces along with fun ones. Do you ever need to take a break from one for the other or do you just sit down and start without any direction?

Music plays a large part in my mood while drawing. Often times when I decide to listen to the Mass Effect soundtracks I end up drawing something much more solemn than expected. Leaving Earth, I Was Lost Without You, and An End Once and For All get me every time!

I think we would all agree that all of those tracks tend to pull at heartstrings.

I’d love to hear about a piece that you wanted to showcase or you consider a favorite! 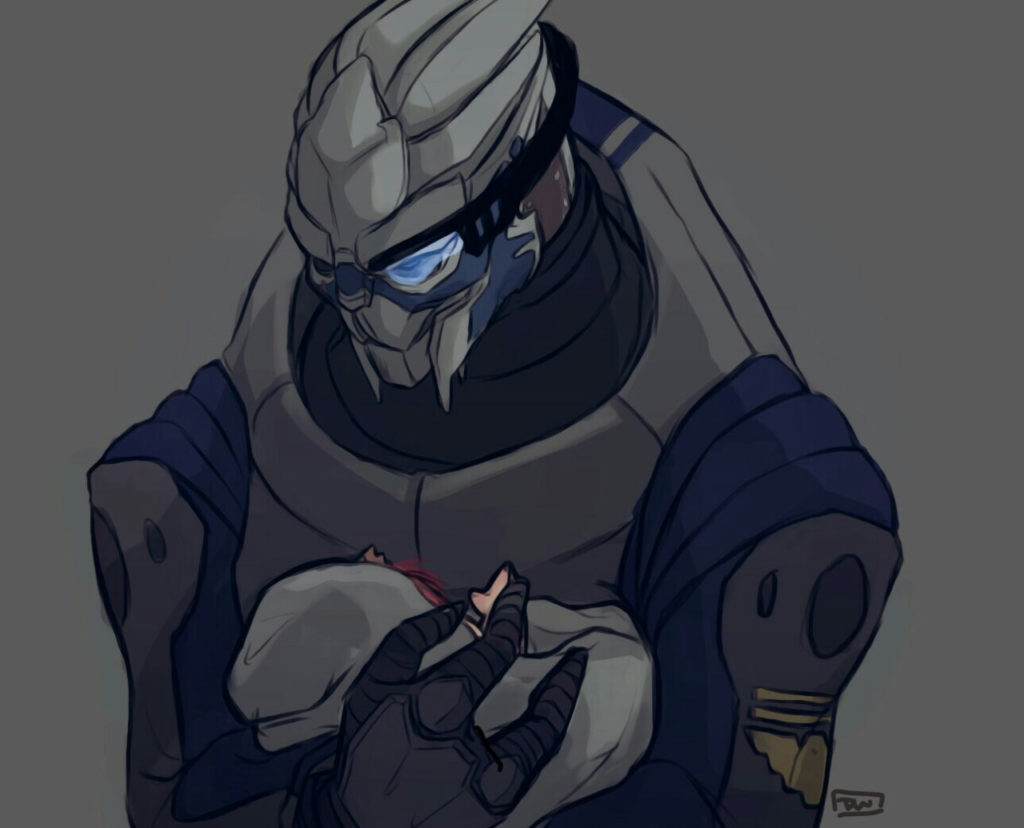 This was for a post-Reaper War fanfic I wrote a few months back. I get it’s not canon, etc, etc. But I love it because it shows Garrus’ personality so perfectly. The fierce protector. It’s one of my absolute favorites just because it expresses the moment of confusion as a turian tries to care for a human child.
Fierce Protector. I think that’s a wonderful moniker for him.

As we end this, do you have anything else you’d like to add? Thoughts about Shakarian, your Shep, or anything for fellow fans of Mass Effect?

I’d just like to thank this fandom for everything.
It has helped immensely to see such beautiful/handsome Shepards with such flare and dignity! I love reading head canons, seeing art and LI stories no matter what the character(s). It has truly deepened my love for Mass Effect.

Thank you so much for your time, Darcey!